Three-Player Chess by Antonio B. (Aged 10) 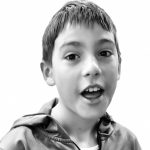 I think that three-player chess is a great game to play, because not only are you being attacked from one side, but from another as well. I would recommend this game for children aged 7 or over because three-player chess is much more complicated than just standard chess. One of the reasons I call this game complicated is because there are a lot more rules to it and several different versions of the game that you can play.

The ‘squares’ on the board are also quite complicated because they are skewed and stretched into different quadrilaterals. Three-player chess is a game for people who have played and know the rules of standard chess. The colours of the three-player chess are not black and white like in standard chess, but instead they are blue, red and green. In one of the versions of the rules of three-player chess, you are only allowed to move your pieces in certain parts of the board until one person is defeated, after which the whole board is open to the remaining two players.

My Experience from Playing Three–Player Chess

My Opinion on Three–Player Chess

I think that three-player chess is more fun and more versatile than standard chess. It is a lot more exciting and I think more people should get involved in three-player chess. It is a much more exciting game than standard chess because it is so much harder to predict your opponents’ move. Even if you are playing the version where some of the board is cut off, it is still challenging because of the increased complexity of responses from more than one opponent.

Find out more about three–player chess: