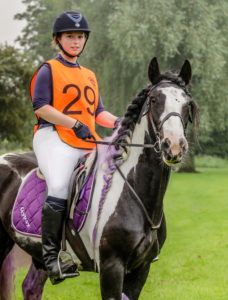 Sogginess, a bit of detective work and dashes of colour are just a few of the highlights of a fantastic fundraising event described here by one of the organisers, Rebecca Parsler.  The Milton Keynes Go Bright Charity Fun Ride 2018  took place around the Great Linford area in Milton Keynes in aid of Potential Plus UK on Monday 28th May. Go Bright was the theme and Go Bright the participants definitely did – decorating themselves and their horses in bright purple and other colours.

Potential Plus UK would like to thank long-standing family members the Parslers for organising this great event and all the wonderful riders, stewards and helpers who took part; raising between them over £500 for the Scholarship Fund. We would also like to express grateful thanks to IndiePics Photography for permission to reproduce their images of the event, EquineK9Branding who kindly sponsored awards for the best Go Bright themed turnout and the highest amount of sponsorship raised and to Santander UK who have very generously match funded the money raised. 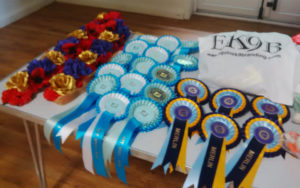 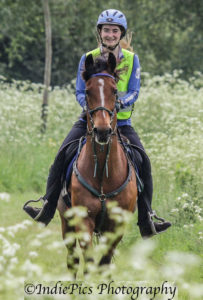 As we sat listening to the thunder and heavy rain on Sunday evening we wondered whether the ride would even take place the following day. We had been out all weekend route marking and despite our best efforts were worried that the route markings might be entirely washed away and the venue too waterlogged to safely park lorries and trailers.

Sure enough, very early on Bank Holiday Monday morning we began to get enquiries from worried competitors asking if the ride was going to be cancelled due to flooding. We reassured them as best we could and Jim (ride health and safety organiser) very bravely set off on what can only be termed an extreme route re-marking adventure. Parts of the course were VERY waterlogged, but by wading waist deep through them Jim established that the footing was still secure and was able to use plastic fence posts to mark out the edge of the river so that riders were kept safely on the path.

To make life even more exciting the steward at checkpoint 1 reported that the Traveller encampment which we had spotted whilst route marking had expanded overnight and was now spread all across the Bradwell Abbey area, meaning that riders in the 29km class would have no choice but to ride right through the middle of it!

In the end it all ran very smoothly; whilst some of the printed signs had suffered in the rain, the rest of the route marking was still clearly visible. Most riders earned their water wings successfully and we only had 3 riders whose horses refused to go through the water – even the smallest Pony Club pony managed fine (possibly they had packed a snorkel). The Travellers were all reported as being very polite and friendly and although we gave all riders in this class the option to downgrade to the 12km class which avoided this area, in the end only one pair chose to do so. However, what with all this, the course was somewhat more intrepid than usual and as a result rode far slower than normal with the fastest speed of the day being only 9.6kmph.

More importantly however, this was a charity ride, and I’m delighted to say that we managed to raise £552 for Potential Plus UK due to the generosity of our riders and their sponsors and a very successful cake stall. Santander UK then very generously “matched” this amount with a further £500 donation. I would also like to thank the stewards and helpers who gave so willingly of their time – we couldn’t do it without you!

After the ride day, however, our work wasn’t quite done. The route ran through public parks and alongside sports grounds, on a separate horse trail, but there had been reports to the Parish Council that hoofprints had been spotted on the cricket pitches. Of course the horse event that had run alongside the pitches was the first suspect. 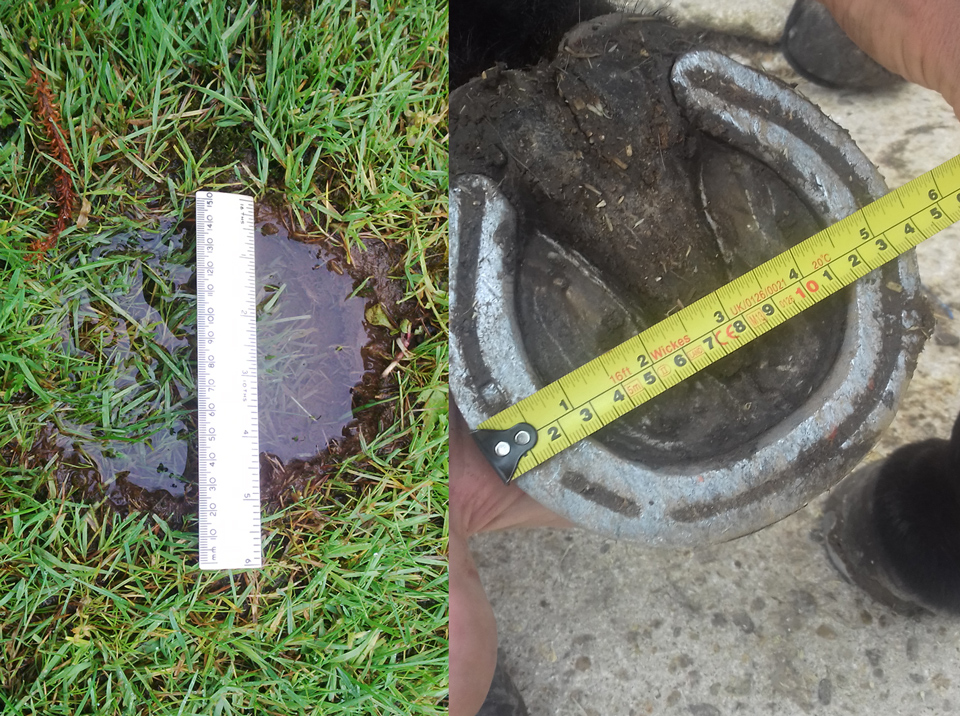 Determined to get to the bottom of it to see who was liable for the damage, Nikki (ride organiser) went to investigate. After looking at the hoofprints on the pitches in relation to the ride route, it was obvious that there was no way a rider could have made the prints as well as going past the official ride photographer who was posted nearby, without it being very obvious they had gone wrong. Nikki contacted the photographer who helpfully provided all the photos taken that day which clearly showed all but 2 riders going past on the correct route. The 2 riders not photographed had been very lost on course and had come home very late and very tired. Although it was possible that 2 very tired fed-up riders had walked slowly home, suddenly galloped across the pitch, returned to the course and continued walking slowly, it seemed rather unlikely.

To prove once and for all that our riders were not liable, Nikki measured the hoofprints which were far smaller than the hooves of the lost horses, as well as not being shod. After a second look at the photos a pair of riders on small ponies were spotted in the background of one shot, heading off the wrong way.

The Go Bright ride was proved not to be at fault, although the Parish groundskeepers are still rather unhappy!