Candyfloss and lettered sticks of rock are two tasty treats that seem impossible to create! – How do You think these sweet snacks might be cleverly cooked, scientifically spun or perfectly pulled? 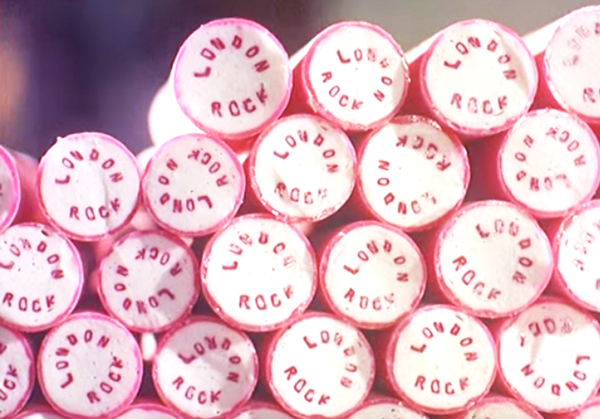 Have you ever gone to the seaside and seen for sale the brightly-coloured, sugary ‘sticks of rock’? They look similar to long, festive candy canes but are simple cylinders that often show just one colour –or an entire rainbow– on the outside.

Usually sticks of rock are popular with tourists because the name of that town appears down the middle of the rock, often in a shade of red against the white inner stick. A fascinating question is…how on Earth is that possible? At the end of this article you will find a link that explains how, but before you click to find out, come up with some creative ideas of your own.

A girl at a beach hut said, “It seems impossible to me to get a name in the middle of rock – it doesn’t make any sense! Do they put the white candy in one half of the shape and then engrave the place name into the flat side…then stick it together with the other side…and Hey Presto you have some named rock candy? Actually, no, then the words would be in a straight line…” -Was she onto something?

Or maybe letter-shaped wires are pushed through the soft, white cylinder and then red sugar solution is poured in to fill the gaps?

Or perhaps neither of these two ideas! –Can You begin to solve the problem? 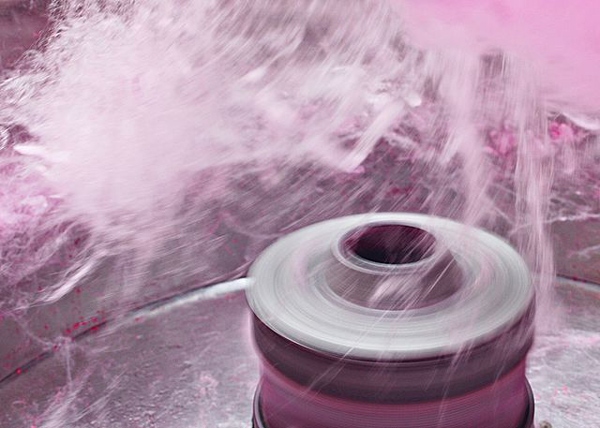 Spinning Sugar in a Candyfloss Machine

The word ‘floss’ (no, not the dance craze!) as a noun means fibres like cotton or silk. ‘Candyfloss’, ‘candy floss’ and ‘cotton candy’ are actually all the same thing, it’s just that in the UK we call it candyfloss, unlike some other countries including the USA.

There are in fact some serious scientific principles behind the cloud-like texture of this sweet, wispy treat. However, before we come to those, how do You think candyfloss might be made?

Is this boy correct? – “I think when you make candyfloss, you put a mixture in a heated sort of circle where you have a stick and whizz it around collecting hot strings of candyfloss. The more you mix, the fluffier it gets.” -Is he right?

Or perhaps you blow air through a ball of mixture until it becomes big enough to fill a bag at the seaside or a funfair? And can you imagine what ingredients might be needed to make the candyfloss itself or its different colours?

A stick of rock: is actually made from carefully-shaped layers of granulated sugar and glucose syrup mixture that have been boiled then cooled. Food colouring and flavours might be added at the ‘pulling machine’, which folds air into the mixture. Thin strips of this toffee-like solution are put together to form letter shapes in the order of square-shaped letters followed by triangular and round letters. These are then wrapped together with the remaining white toffee to form a big block, which is then stretched into a long cylinder shape to make the chunky letters become smaller and form the finished stick of rock.

For a fun video that shows rock being made and cut to size, check out https://blog.haven.com/make-stick-rock/. It’s probably not at all what you had imagined! The pages at https://en.wikipedia.org/wiki/Rock_(confectionery) and https://h2g2.com/edited_entry/A4552841 have lots of information too.

If you want to make something out of similar ingredients, you could try experimenting with sugar crystals at https://www.learning4kids.net/2015/01/07/make-sugar-crystals-stick/

Candyfloss: uses heat, air, some complex science and a process called ‘spinning’ to turn sugar granules into floss, which can then be ‘spun’ into the familiar candyfloss cloud-shape. Adding simple, liquid food colouring or fresh fruit extract at the start will tint what would otherwise be the classic white fluffball!

Scientists are even using the principles of a candyfloss machine to experiment with growing human body tissue! There is so much to think about so do please investigate at http://www.bbc.com/future/story/20160427-the-amazing-chemistry-of-candyfloss.

For more information and some photos from around the world, visit https://kids.kiddle.co/Candy_floss. Or if you fancy making something similar yourself, check out https://www.joebrowns.co.uk/blog/how-to-make-your-own-candyfloss/